Tablet and phone firmware can vary between geographical markets for a given make and model of a device. The compatibilities presented below represent the results of LAVA’s testing of North American firmware unless indicated otherwise. LAVA recommends testing before large-scale deployments to ensure successful operation.

Note: The current list reflects updates issued from Samsung and tested by LAVA.

1. The earlier firmware releases for the Tab S3 had serious issues with the USB-C PD Specification. The RJ1 update has eliminated the earlier issues and became available in November 2018.

2. The previous firmware of the Tab Active2 is not compatible due to problems with the tablet’s USB-C PD handling.

4. The Tab Active2 with build M1AJQ.T390XXU3BRJ7 was only tested on the SM-T390. The SM-T395 was no longer available for testing, as it had been returned to the customer.

LAVA will assist in the testing of other tablets provided a sample tablet is made available. The sample tablet must be delivered with the intended build already installed.

The tablet features used by the LAVA products are not universal across the Samsung Tablet line. Samsung tailors the tablet firmware to a world region or country. Tablet versions created by Samsung for mobile carriers do not behave the same as the standard products. You must verify the behavior of the model of tablet and firmware build to be used before committing to any deployment.

For a limited time, we're including a free Charge-Check with every order to help our customers in these unprecedented times.  Charge-Check is an accessory that sits between the mobile USB charger and your phone or tablet. Charge-Check protects the device battery from being trickle charged and/or overcharged by turning on and off your mobile charger current. Limit one per address. Click to read the whole story on Charge-Check! 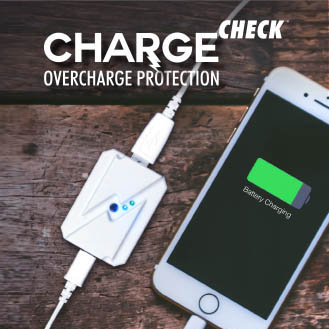